The Segment to Quad action will convert either a line segment or cubic curve to a quadratic curve segment. A different behavior is received when the handle is inserted depending on the chosen segment type:

In the provided example, the Line Segment located on the right side of the figure is converted into a Quadratic Curve Segment. Follow the steps below: 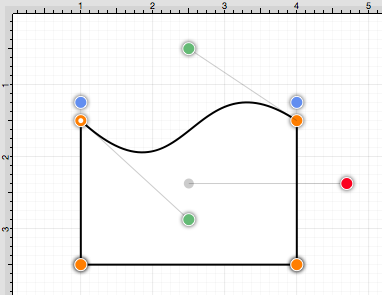 The provided Quadratic Curve Control Point can be moved in any direction by performing a Click/Drag combination. In this example, the new control point is dragged upward.

Note: Refer to the Handles Reference section of this documentation to learn more about each handle.